We’ve all had an idea that we want to turn into a business.  Some of us have transformed that idea into action and created a business.  Few of us were able to make that idea into an actual profitable business.  If you have a great product or service how do people find out about it?  How do you present your idea/product/service/company to potential buyers and decision makers?  Let’s take a lesson from DollarShaveClub.com and their video that blew up the internets and  launched their idea into a successful business.

The first ten seconds of your video are the most important.  Mike tells us what Dollar Shave club is and what they do in the first 10 seconds. “What is Dollar Shave Club.com? Well, for a dollar a month we’ll send you high quality razors right to your door.

Companies need to tell people who they are and what they do, and they have to do it quickly.  Tell people the name of your company and what kind of industry you are in.  It’s not even 10 seconds and Mike says the name of the company twice.  Since he does this in such an interesting way, you want to watch the whole video.  Mike has us eating out of the palm of his hand. 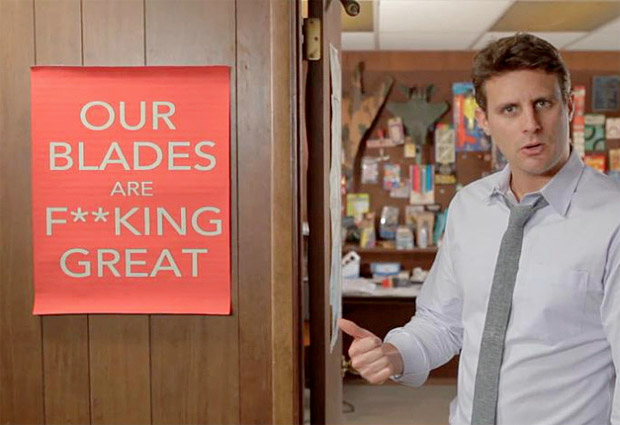 Making someone laugh is one of the quickest way to build trust.  Once you have their trust your power to influence them increases ten fold.  Think of your personal life when someone has made you laugh. Don’t you love being around people like that?  People will remember your message a lot better if you can make them laugh while you deliver your message.  Make it your goal to make someone laugh everyday.

We live in a crowded busy world with millions of brands crying out for everyone’s attention.  You need to be different to stick out because if you’re the same nobody listens to you.  Attention is one of the world’s scarcest resources and the decision-makers’ attention is something companies are willing to spend billions of dollars to buy.  The worst thing your video could be is boring.  Boring Sucks.  Boring always leads to failure.  Be interesting instead.

I’ve done a couple jobs for some smaller companies where they wanted a “safe” video.  They didn’t want to get criticized or offend anybody.  This resulted in a completely boring and forgettable video.  Naturally criticisms comes to those who stand out, but don’t be afraid of it.  Grab criticism by the horns and hump it into submission.  Being safe is risky.  It’s safer to be risky.

*  Being different is about standing out in a positive, productive manner that can sustain itself over time.  Dennis Rodman was different but not in a good way.  Sure he drew attention to himself but where is he now?  His play-dough like hair was more like a desperate cry for attention, which made it hard for anyone to take him serious.  Don’t be so different that it makes you look like an attention starved five year old.  Be original.

DSC had 12,000 people sign up in the first 48 hours from when that video launched.  DSC could would not have this kind of success fifteen years ago. The resources weren't there yet.  We live in a great time where the internet has eliminated our excuses.  We can no longer use the phrases, “I don’t know how” or “I don’t know who” or “I don’t have enough money.”  DSC made this video for under $5,000!  Gone are the days where you need tens of thousands of dollars to produce a commercial and to have millions of people see it.  YouTube has made distribution free so anyone in the world can watch your video anytime they want.  YouTube has changed the way we advertise, you weren’t forced to watch this video, you wanted to watch this video and that’s why it's so successful.  Good advertising is entertaining.  DSC has given us a great case study to learn from.  Now get out there and make videos that are F**king Great!